We are a country of predominantly small businesses.  Nearly 97% of all firms have 19 or fewer employees, and about 87% employ five or fewer people. This preponderance of smaller firms is consistent across most industry sectors.

Number of Enterprises by Size 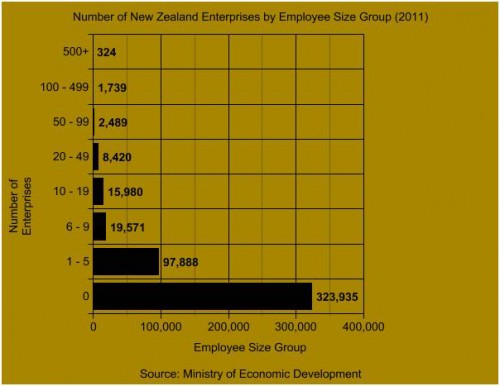 New Zealand’s small and medium-sized enterprises (SME’s) make a significant contribution to the economy. They account for just under 40% of the country’s output and nearly one-third of total employment (which rises to 42% if the self-employed are added-in). Smaller businesses are also the most dynamic group in the business population. The numbers of SME’s entering and exiting the market is high, but at the same time these businesses accounted for 60% of the new jobs created in the economy over the last four years. Research shows that high business turnover, or business churn, is associated with higher labour productivity.

SME’s typically show strong financial performance. For example, businesses with 1-5 employees have the highest average profit per employee of any group of businesses in New Zealand. They tend also to outperform their larger counterparts in average real sales and other income.

SME’s are critically important to regional and rural areas of New Zealand. In areas such as Northland, Tasman and the West Coast, SME’s account for a large proportion of employment.

And there is one major issue that stands out for many SME owners: Change of Ownership and Succession. The 2011 ANZ Privately Owned Business Barometer shows that 55 percent of business owners think that gradual change of ownership would be more attractive and 40 percent of business owners think that finding a suitable acquirer is the key barrier to change of ownership.

Additionally, the impact of economic conditions continues to be seen as the biggest constraint to growth, followed by a lack of capital. Aversion to debt, aversion to risk and a lack of skilled staff are also constraining growth.

Domestic competition/market pressure was the biggest issue for business owners this year, followed closely by availability of staff, an issue that has been steadily increasing since 2008. (Source: ANZ Privately Owned Business Barometer 2011)